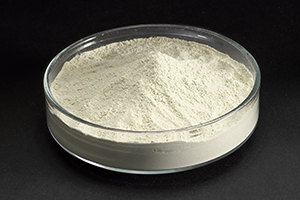 Attapulgite is a silicate mineral primarily composed of hydrous magnesium and aluminum silicate. It is a type of absorbent clay generally called “acid clay.” Unlike bentonite and kaolin clays, which are also absorbent clays, it does not become a gel-like compound when treated with electrolytic matter. In addition, its unique structure and “hollow needle” shape give it outstanding colloidal properties and absorbency.

Attapulgite clay contains 70-80% attapulgite, 10-15% montmorillonite, sepiolite, and other clays, 4-5% quartz, and 1-5% calcite and dolomite. The non-clay compounds are removed during processing, and the final product is between 60-70% attapulgite.

Its structure is a long parallel arrangement of silicon tetrahedrons and double oxide chains. Both sides of the double oxides are arrayed with 6-fold structures that bond with magnesium atoms.

This unique structure affords attapulgite two features: first, because of its chained structure, it does not expand in the way that other clays like montmorillonite do. The second feature is the way the molecules are arrayed in a needle-like, dehiscent shape parallel to the (110) surface that follows the Si-O-Si bonds. These needle-like crystals in attapulgite are about 1 micro meter long and 0.01micro meter in diameter.

Attapulgite achieves high absorbency through its very large surface area. In its natural state, it absorbs about 200% of its own weight in water.

It has excellent absorbency, rheology, and consolidation.
It also has the qualities of a catalyst.